“The secret to winning is constant, consistent management.”
– Tom Landry

Winning is the ultimate goal for coaches and athletes. To be an effective leader on the field or court, coaches need to take a look at their coaching behaviors and identify areas in which they can improve. The twelve statements listed below give you the opportunity to start this evaluation process. As you read the twelve items think about how you respond to your athletes……and take this inventory to see how you rate.

To be an effective leader on the field or court, coaches need to take a look at their coaching behaviors and identify areas in which they can improve. The twelve statements listed below give you the opportunity to start this evaluation process. As you read the twelve items think about how you respond to your athletes. Once you have considered each statement, indicate whether you never (1), rarely (2), sometimes (3), often (4), or always (5) respond in that way by circling the appropriate number.

2. do not yell statements of encouragement during practice or competitions.
1 2 3 4 5

4. instruct athletes on how to correct mistakes or flaws in their technique or performance.
1 2 3 4 5

6. yell instructions to athletes following mistakes to motivate them to perform up to their potential.
1 2 3 4 5

7. ignore technical errors that athletes make during a competition.
1 2 3 4 5

9. instruct athletes on needed strategies for an upcoming competition.
1 2 3 4 5

1. Reinforcement – A positive, rewarding reaction (verbal or nonverbal) to a good play or high-quality effort such as saying “good job” or “way to go”. Athletes respond to their coaches when they focus on the positive and give clear feedback.

5. Punishment – A negative reaction (verbal or nonverbal) following a mistake such as saying “what the … was that?” Punishment should be keep to a minimum because it can cause problems. First, punishment arouses fear of failure and will usually decrease athletes’ performance. Second, punishment may be the only attention the person is receiving and could reinforce the undesirable behavior by drawing attention to it. Third, punishment can establish a hostile and offensive learning environment.

8. Keeping control – Reactions intended to restore or maintain order among team members. Coaches should be able to keep control in a positive manner.

9. General technical instruction – Spontaneous instruction in the techniques and strategies of the sport (not following a mistake). A coach should show different techniques to their athletes before mistakes could occur. Showing a specific maneuvers and have the team or the individual practice it.

10. General encouragement – Spontaneous encouragement that does not follow a mistake. A coach could say something like “keep up the good work” or “go out there and do your best”.

11. Organization – Administrative behavior that sets the stage for play by assigning duties or responsibilities. A coach can assign certain responsibilities to individuals during practices and game/competitions.

12. General communication – Interactions with athletes unrelated to the game. A coach can talk with their athletes about school, athletic and personal goals, and different aspects of life. One important aspect is that a coach be there “emotionally” for their players.

Now that you have completed the brief questionnaire and learned what the items and behavioral categories represent, you can evaluate your coaching behavior more thoroughly by completing the profile and reading the following pages. Complete your profile by referring back to the response or number you selected for each item. For example, if you circled 3 or sometimes for item 1above (Reinforcement), you would dark the section on Reinforcement in the profile below up to and including 3. Once finished filling in the profile below (based on your response selections above), you can evaluate your overall coaching behaviors. Coaching behavior should be evaluated regularly to make sure that the coach is giving the players the best quality of coaching. Which behaviors stand out when you coach? 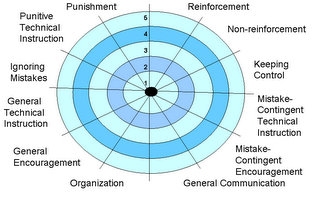 Research on effective coaching indicates that coaches should primarily use a positive approach that incorporates: (1) positive reinforcement such as “nice explosive start off the blocks”; (2) general technical instruction such as “to be successful against a half court defense we need to step between the defenders and pass to the player cutting to the top of the key”; and (3) general encouragement such as “keep focused on the task and success will come”. Athletes have shown increased self-esteem, increased positive attitudes, and they rate their team and sport positively when coaches use positive reinforcement, general technical instruction, and mistake contingent encouragement behaviors. Coaches who use positive behaviors will have lower dropout rates or dissatisfied athletes than coaches who do not use these behaviors.

“You can motivate players better with kind words than you can with a whip.”
– Bud Wilkinson

In addition, coaches should not pick one behavior and run with it. A coach needs to provide a combination of several behaviors during a practice or competition. Athletes are different and may respond differently to the same coaching feedback. Knowing your athletes and individualizing your coaching behavior to meet the needs of each athlete should be the number one goal of every coach. Individualizing is not easy, but by determining the appropriate coaching behaviors for each athlete, you will have the greatest impact on the athlete’s performance.

“You must learn how to hold a team together. You must lift some men (women) up, calm others down, until finally they’ve got one heartbeat. Then you’ve got yourself a team.”
– Bear Bryant

Coaches have considerable influence on their athletes. Using the right behaviors and individualizing their coaching will help athletes develop the necessary skills physically as well as psychologically. If after reading this you have identified behaviors you want to incorporate and behaviors you want to eliminate, now is the time. Don’t wait! By starting the new behaviors and eliminating the bad your coaching performance will increase as will the performance of your athletes.

The stem (e.g., “As a coach, I”) is changed for the appropriate version. For example, the stem for the parent version for preferred behavior of a coach is “I prefer my child’s coach to”. The reason for the various versions is to determine the perceptions of what a coach should be doing at this particular level and what a coach is actually doing, in addition to what is preferred. This information can provide coaches, athletes and parents with valuable information and an opportunity to discuss the roles and needs of each.